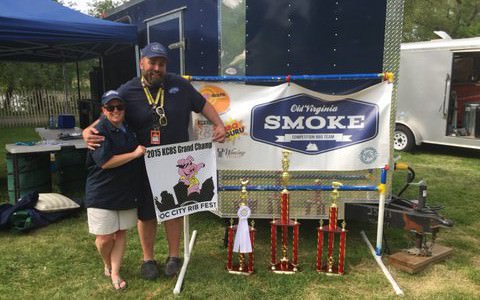 The following is from one of our very own sponsored teams, Old Virginia Smoke.  Luke Darnell had given us the green light to share his memories from Roc City Rib Fest a couple weeks ago.  Enjoy!

Memorial Day weekend is always special for us.  We make our annual pilgrimage to Rochester, New York, to visit Kim’s family for the weekend and participate in the Roc City Rib Fest. It is a fantastic event, hosted by Brian and John, two fantastic guys. Just a great crew of organizers and volunteers that make sure you don’t want for anything.

Roc City plays host to a rib only competition on Saturday, as well as the World Bacon Championships. We didn’t cook bacon last year, but practiced a bunch this year.

Roc City also plays host to a bunch of pitfalls to reach up and grab ya. Friday night last year was a hell of a party, one which Luke wasn’t quite expecting.  This year, he came prepared.

After setting up Friday afternoon, and then having a marvelous dinner made by Aunt Debbie, Bean, Mommas, Uncle Mike, Kristine, Dusty, Vince and Mini Vinny….(and lest not forget 8 layer jello by Miss Carly), Luke returned to the park loaded for bear, and went to visit his buddy DivaQ with a pre-planned bottle of blackberry shine.

The whole DivaQ crew was in the house, and the first bottle of shine was  eliminated in what seemed like minutes.  The chant “pineapple!  pineapple!” started.  Then that jar was eliminated.

All told, it took about 45 minutes.

Everyone was feeling good.  Real good.  Except Miss Jessie, who kept looking at Luke and giving him throat slash gestures.

Not to go into too much detail, but there were many hilarious and somewhat tragic moments throughout the evening.  Of note:

So Saturday begins with Kim arriving at the trailer to find Luke perfectly situated in his cot, heat on, and afraid of the light.  We began our bacon prep and cooking, and began the apology tour that was necessary.  (Again, I’m so sorry about the chair Jay.)

The bacon cook was fun.  With all of that however, the rib cook on Saturday kinda got lost, and we didn’t do so well.  But we did manage a 9th place call in bacon in a box, and Kim earned a 9th place dessert call with her fantastic bourbon bacon chocolate pecan pie.  Everything back to normal, a beautiful air show by the Blue Angels, and Rochester garbage plates completed the evening.  It was time to make the donuts.

The great part about cooking different events around the country is meeting new people.  We met a ton this year, but wanted to give a special shout out to our new friends at Rack Em BBQ and Sweet Heat BBQ.  Couldn’t ask for better neighbors or a better time.

We had a good cook.  No surprises.  And another air show which was fantastic.  We went to awards feeling good.

Didn’t know what we were in store for.

We won chicken.  That had never happened before.  And then…we won ribs.  Holy crap.  Then a 6th place pork call.  Looking pretty good, but so was our good friend Bill Gillespie with Smokin’ Hoggz, winner of last year’s American Royal Invitational.  Who also collects beer hats.

Brisket comes down, and Bill gets his fourth call.  And OVS gets shut out.  They hate our brisket up north.

They announce the top ten and it comes down to the two of us.  And OVS eeeked out a .5 point win for our second ever GC.

Such an amazing weekend, one that won’t be forgotten for a long time.  We will miss our northern BBQ family, and look forward to seeing them on the BBQ trail.

Huge thank you to our sponsors Dizzy Pig, BBQ Guru, Hav’n a BBQ Sauce, Kosmos Q, and the Wine’ing Butcher.

On to the next one at the Beltway BBQ Showdown in Ft. Washington, MD.