It’s safe to say that I’ve cooked my fair share of BBQ. In fact, for me, BBQ is a way of life, which is why I spent more than 20 years on the pro BBQ circuit. I’ve smoked more briskets and have pulled more pork than I care to remember.

We started competing in 2002, mostly in competitions sanctioned by KCBS (Kansas City Barbecue Society). During my time competing, myself and the rest of the Dizzy Pig crew honed our skills and cooking processes in over 130 contests across four categories.

We cooked a heck of a lot of food, and gained heaps of experience along the way.

Recently, I decided to call it a day and hang up my BBQ tongs for the last time as I retired from competing. I’ll never stop grilling, though. I don’t think I could if I tried.

Winning over a pro BBQ contest judge is not easy, it takes moist, tender, and tasty BBQ and a lot of know-how. As I’m no longer competing, I’m lifting the lid on my knowledge and will reveal my BBQ secrets, the very same secrets which allowed the Dizzy Pig BBQ Team to win countless awards over the years (as you can see in the graphics). 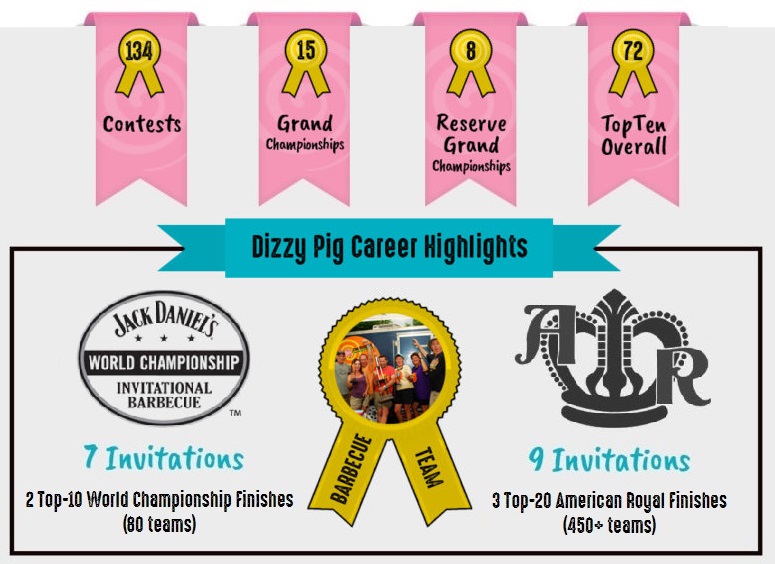 Remember, we’re talking bona-fide BBQ here, the type of meats that start off tough but end up tender and juicy — meats that benefit from seasoning liberally and cooking for hours.

Here are my top 6 tips for unforgettable, fool-proof BBQ.

During my time competing, one of the most common mistakes that pitmasters and backyard barbecuers alike would make, would be going overboard with the smoke.

Now, y’all are like me, and you know your BBQ, which means that I don’t need to tell you how much of a difference smoke can make to your finished dishes. When it comes to smoke, though, you can have too much of a good thing.

Food cooked with charcoal and wood has an amazing flavor dimension that gas grills or ordinary kitchen appliances just won’t give you. To achieve these flavors, though, you need to respect the smoke. 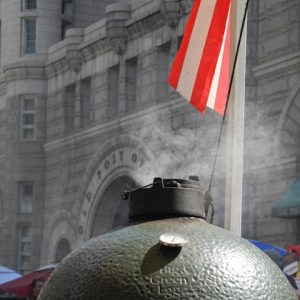 Salt and pepper can enhance most dishes, but you wouldn’t tip half a bottle of salt and pepper onto your dish when seasoning, so why would you smoke the holy heck out of your BBQ?

Smoke should lift the flavor of your BBQ and compliment it, not overpower it. Before adding your meat to the grill, make sure the fire is burning cleanly, and forget all this nonsense about soaking your wood before adding it, as wet wood smoulders and won’t burn cleanly.

A good pitmaster cooks with all his or her senses, so trust your nose in this case. If the smoke smells pungent and acrid, wait for the fire to burn cleaner.

Use fresh ground seasonings on your meats

Obviously, I’m slipping this one in. After all, we won all our awards using our signature Dizzy Pig spice blends, so it would be a crime not to include this tip. 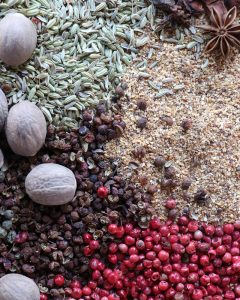 When barbecuing, seasoning is everything, and our fresh ground seasonings and rubs are just what you need to take your BBQ to pro level.

These are the blends we used on our competition meats:

Back in 1998 when I was a fresh-faced BBQ contest newbie, I’d cook all my meats straight through without wrapping. I was scared that wrapping would stop the smoke from getting to the meat.

Now, don’t get me wrong, folks seemed to enjoy it, and I even picked up my first few awards with this method, but after a while it became clear that something was missing. My cooks were good, but I wanted perfection and it was clear that I was losing moisture when cooking. How did I know? I opened my eyes and saw the juices literally dripping out the meat. 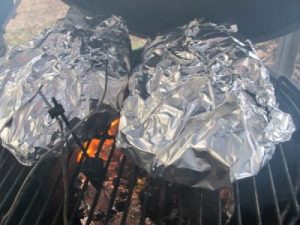 Back in 2005, my good buddy Tuffy Stone, who is now a multiple World Champion winning pitmaster, said something I’ll never forget:

Since then, I always wrapped my meat and the difference is a gamechanger. Once you’ve built up a great flavor crust and have a nice smoky taste in your meat, your focus should turn to moisture preservation. Your goal is to maintain as much moisture as possible, rather than allowing it to evaporate while the meat is getting tender.

I won’t start a war by getting into the whole foil vs paper debate, though for the record, I use foil. The most important thing here is that, once you have your flavor, get that meat wrapped!

Cook until tender, not up to temperature

Another common mistake that BBQ newbies tend to make, is obsessing over numbers and cooking their meat until it reaches a specific temperature, rather than cooking it until it’s tender.

Some meats such as chicken breast, pork chops, lean beef, and seafood, will become dry, tough, and chewy if overcooked past a certain temperature. BBQ meats, however, are tough when they’re undercooked.

The goal of a good cook is to achieve soft, moist, tender, melt-in-your-mouth meat and the only way to achieve this is by look and feel because each cut of meat is different. Low and slow is the way to go here, and the longer the cook, the lower the internal temperature will be when tenderness is achieved. 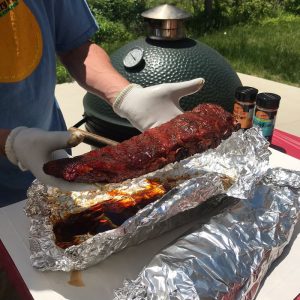 Generally, the finished internal temperature of barbecue meats will be between 180°F and 210°F, but there is no magic number that tells you when it is tender. The feel of the thermometer probe is the way I’ve always judged tenderness, and it’s worked like a charm. It should pull out as easily as it pushes in… some people say “it should probe like butter”.

Rest your meat as soon as tender

Once your meat is tender, get it off the heat and leave it to rest. Don’t you dare even think about unwrapping your meat and cutting into it yet, no matter how amazing it smells. Resting is arguably just as important as cooking it right.

Once you’ve wrapped your BBQ and have halted evaporation, the tenderization stage is now in full swing. For me, I usually find that after the wrapping process, it takes 1 – 3 hours to achieve the melt-in-the-mouth tenderness that we BBQ fanatics can’t get enough of. 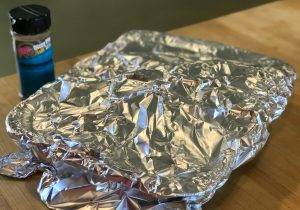 Probe the meat occasionally during the cooking, touch it and feel for tenderness. The last thing you want to do is overcook your meat and make it mushy! Yep, it is possible for meat to be too tender, and yep, overcooked BBQ is mushy.

Check the meat occasionally during cooking and when you’re happy with where you’re at, go ahead and leave the meat to rest. I normally start checking for tenderness when the internal temperature reaches 185°F. As soon as I’m happy with the tenderness, off it comes from the heat.

I normally rest my briskets for around 30 minutes, my pulled pork for around 1 – 3 hours, even 4 sometimes, and my ribs for maybe 10 – 15 minutes at the most.

Serve straight away after pulling or slicing

Finally, my last tip for you today is your timing. You must serve your meat straight away after pulling or slicing. 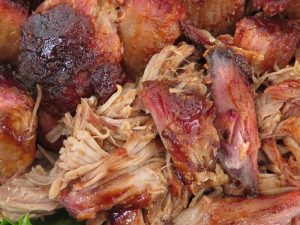 As soon as you pull your pork butt, or slice into your brisket or ribs, the quality of the meat will begin to deteriorate, and that, Houston, means you’ve got a big problem. Liquid evaporates, the surface of the meat will start to dry out, and within minutes the texture will change, and not in a way that you’ll like.

Just to show you how serious this is, I’m going to use the term ‘paramount’. It is paramount that you aim to get your food into the mouths of your hungry guests as soon as the meat is ready.

You want your guests to enjoy a nirvana of smoky, well-seasoned, tasty, juicy, tender, perfectly pulled/sliced BBQ, not have them bite into chewy and dry meat with the texture of old boot leather, so get it served straight away!

There you have it… my six tips for moist and tender BBQ.
Now go wow your guests with the best BBQ they’ve ever had.