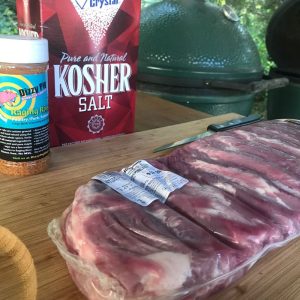 There are two common types of pork ribs — spare ribs and baby back ribs.

You can find spare ribs sold as whole untrimmed slabs or as St. Louis style spare ribs. St. Louis style ribs are spare ribs that have the rib tips removed and are more uniform in shape. Rib tips (also called brisket) are full of cartilage. For competition-style ribs, we only want to use the bone, so we purchase St Louis cut. However, it is easy to buy whole spare ribs and trim them St. Louis style yourself. We’ll show you how.

We like large ribs for our competition cooks, so we select slabs that are at least 3 pounds. Look for ribs that have good fat marbling, but not too much fat. Stay away from slabs that have “shiners”, where the meat cutter cut too close to the bone so that the bone shows through the meat.

The first step I take is to remove the sheet of membrane on the backside of each slab of ribs. I find working a knife under the membrane, lifting up and then grasping and pulling that loose ‘tag’ with a paper towel will quickly and efficiently remove the entire sheet, usually in one piece.

If starting with untrimmed spare ribs, remove the breast bone from the rest of the slab. There’s some nice meat here, but it doesn’t really present well, so we’ll cook it on the side and put the meat into baked beans. To make the spare ribs into ‘St. Louis style’, continue to trim off the tail end at the last bone, remove any large ‘blobs’ or extraneous fat as well as the ‘brisket flap’ of meat that appears on the backside of the ribs. Again, this piece is fine for smoking up and adding to chili or beans, but detracts from ‘presentation-quality’ ribs.

If you purchase St. Louis cut ribs, often there is still some rib tip material left. Cutting off this material to the bone is optional, but for competitions, we remove it. The key is finding the end of the bone, and cutting right where the bone meets the cartilage.

On the meat side, trim all visible membranes and excessive pockets of fat. On the thicker end of the slab, the end rib often has a blob of fat and sometimes a piece of meat that is not actually a rib. I trim that as well.

Ribs cook for a long time, and when the spices are cooking on the meat for that long, they get mellow and nutty and even more delicious. So don’t be shy with laying it on!

The way I like to think about it is to cover the meat so you can’t really see it. Don’t season it like you would on a big pork butt where you try to pack as much on as you can by pressing into the meat, but shake on a good solid layer – more on the meat side than the bone side.

Since Dizzy Pig Seasonings are not heavy on the salt, consider shaking on a little salt before you season.

Want to Learn How to make BBQ Ribs? Check out our Recipe!

May be the best thing ever made for salmon, but salmon is only the tip of the iceberg. Truly all-purpose seasoning for all taste buds.