Most people have enjoyed a traditionally roasted turkey during the holidays. Most turkeys probably get cooked that way.

And hey, why mess with tradition?

Well, everybody needs a change of pace once in a while, and if you can get more flavor out of that bird, why not turn tradition upside down? Last year “Mad Max” Rosen, along with Chris, put on a turkey class outside our Dizzy Pig HQ, and we cooked turkeys several different ways.

While a spatchcocked turkey may not be as pretty as an evenly browned whole turkey sitting on a platter, and you won’t get the drippings for gravy, the bird will be more flavorful and will cook faster as well.

In hopes that we can encourage you to try a different, more flavorful variation of a mostly traditionally cooked bird, here is what we did in this simple cook.

Turkeys were a bit scarce after Thanksgiving this year, and all that was available was an Empire kosher turkey. This specimen was a shade over 14 pounds, and was thawed in the fridge for 3 days. Sometimes we do an overnight brine, but we wanted to see how this high-priced bird would turn out with a simple coating of rub.

The hardest part is removing the backbone. A good pair of heavy duty kitchen shears is a great tool, but it can also be done with a sharp knife and a little patience. Cut on each side of the bone, cutting through the rib bones that attach to the main backbone. The trickiest part is where the thigh bone attaches, and it may take some twisting and hacking. But it’s worth the effort. 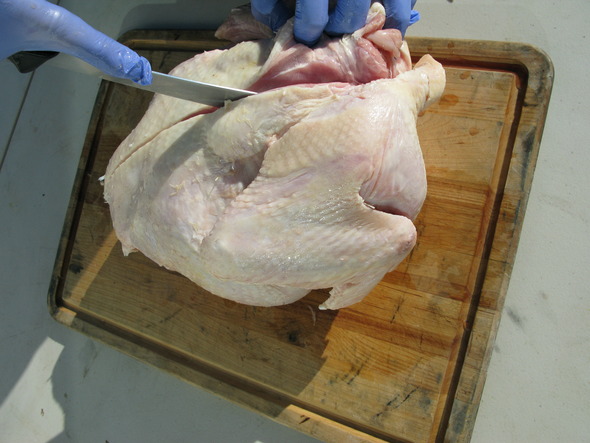 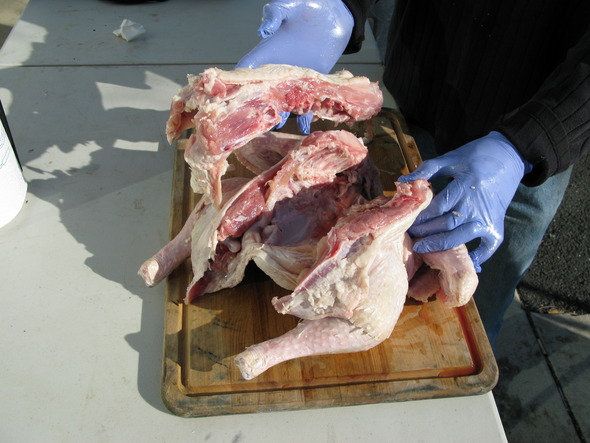 Once you remove the backbone (save it for making broth/stock) open up the bird, flip it over and push the palm of your hand to flatten it out as much as possible. 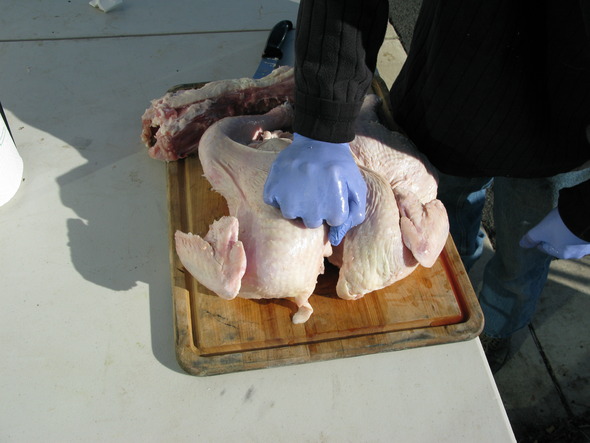 Now it’s ready to rub. We started with the skin down, and laid down a generous coating of Dizzy Pig’s Raging River™ rub. Mediterranean-ish™, Tsunami Spin™, Shakin’ the Tree™, Dizzy Dust™…and even Swamp Venom™…are also fine choices, though the Raging River™ was the favorite at last year’s class. While we let this rub “set up” we prepared our fire. 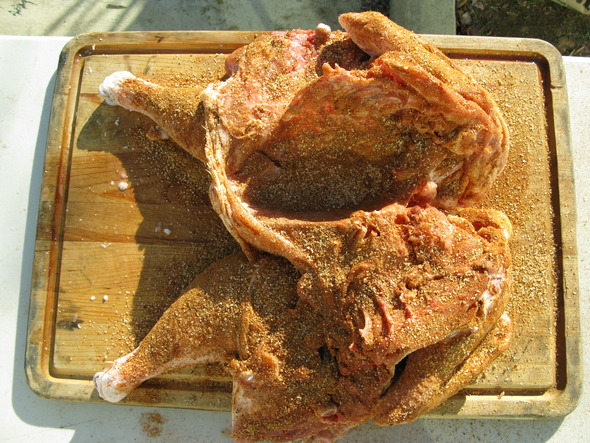 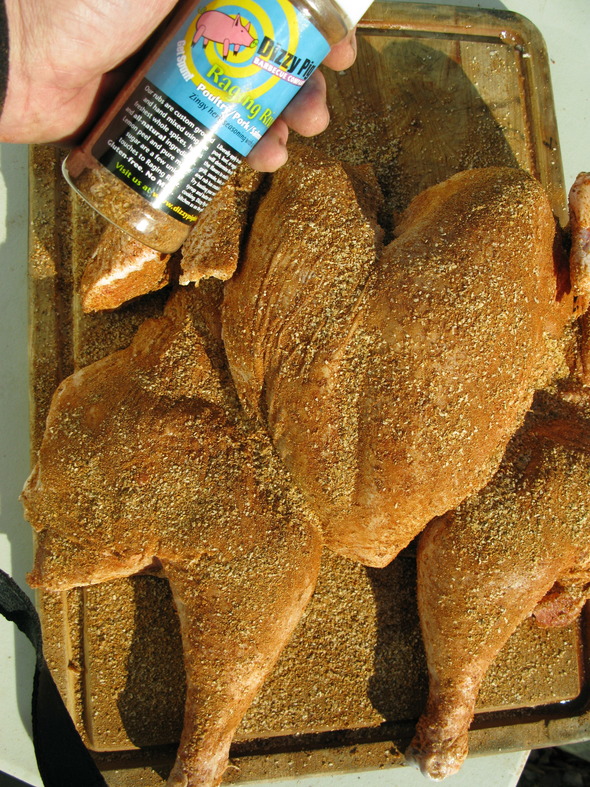 We chose to cook on a large Big Green Egg®, but any charcoal cooker where you can control your fire, and get the bird at least 12 inches from the fire, will work.

When cooking such a large bird direct, you really need to keep the fire under control to avoid over browning before the inside is done. In our cooker, we try and use just enough charcoal to get the job done. After starting the fire, we slowly brought the dome temperature up to around 300°F while we applied rub to the skin side of the bird.

Once the temperature was stabilized, we set the turkey on a raised grate and closed the cooker. Since there was now a cold bird between the fire and the dome thermometer, the temperature dropped to 250°F, which is where we decided to hold the temperature.

Resisting the urge to open the cooker (which lets in more air and makes the fire hotter), we let it go for about an hour before checking the color on the bottom of the turkey. It was browning up nicely, and very slightly charred in a couple spots. Perfect. We let it go for another half hour, then carefully flipped the turkey skin down, again making sure not to have the cooker opened too long. If the fire gets too hot, you may end up with a black turkey.

An hour later, 2 and a half hours into the cook, the thighs reached 180°F, while the breast was a perfect 160°F. As you can see, this bird cooked at the rate of just over 10 minutes per pound… significantly quicker than then 15-20 minutes per pound often quoted for roasted birds. 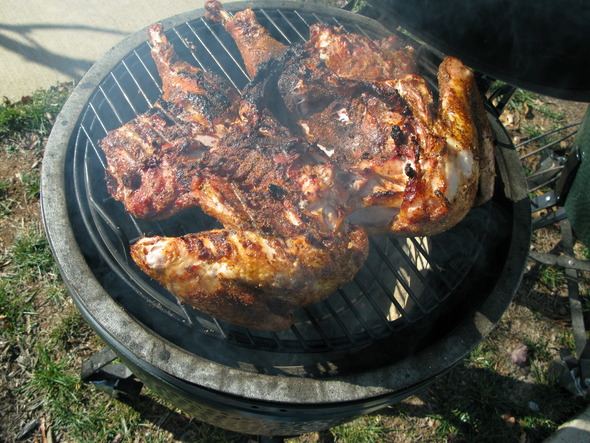 Will this become a new turkey tradition?

After a 20 minute rest, the turkey was ready to serve! The breast was so moist you could squeeze juice out of it, and the dark meat was well rendered and moist. The most noticeable aspect of this bird was the layers of flavor from the smoke, the browning, and the fat dripping on the coals. Top it all off with being perfectly cooked, and it may just be time for a new tradition! 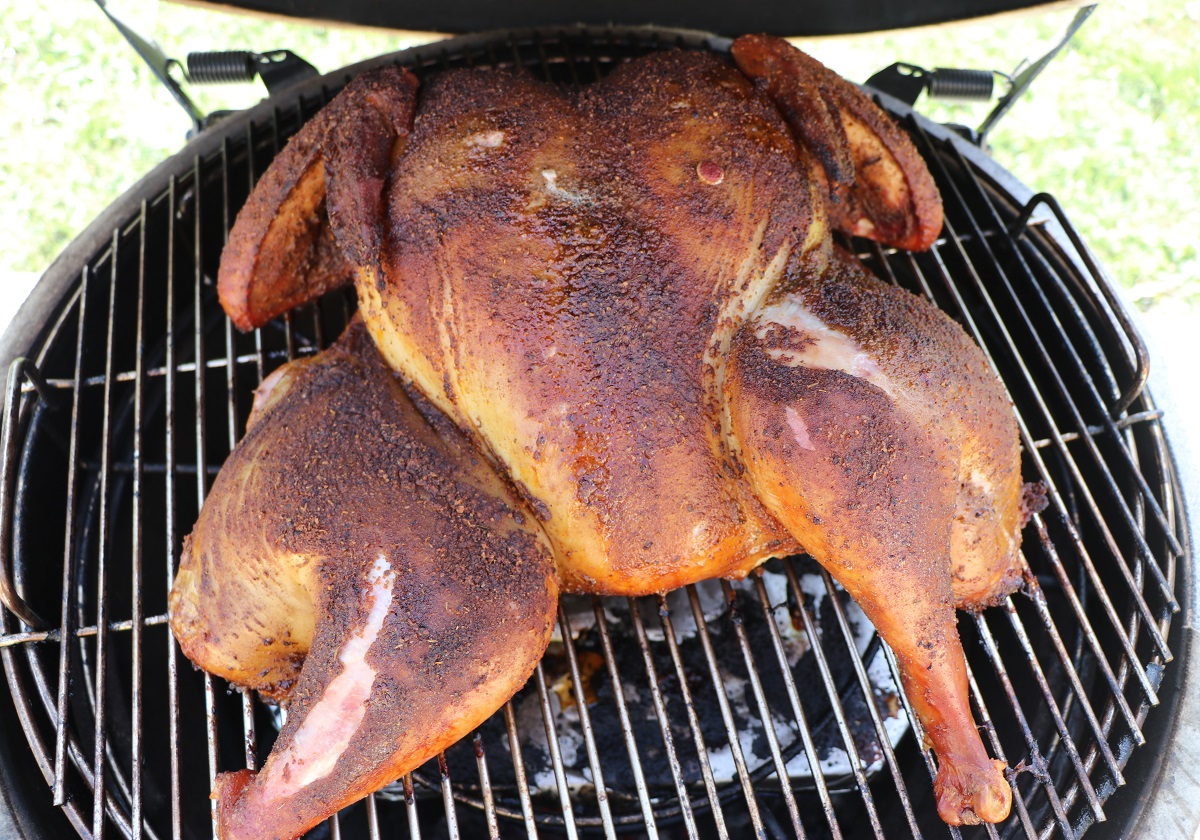 Most people have enjoyed a traditionally roasted turkey during the holidays. Most turkeys probably get cooked that way. And hey, why mess with tradition? Read More

The Story Behind Tsunami Spin

As much as you love summer grilling, by August the idea bank is pretty much on overdraft. Tsunami Spin boosts you back up with an amazing, nowhere-else currency of flavor! Read More

By The BBQ Buddha Read More