Back in 2002, Ribs Dizzy Style on the Big Green Egg was one of the first recipes posted on the Dizzy Pig website (at that time brand new). This is a low/slow method that does not require wrapping the ribs to steam. It takes a little longer than when wrapping but has a superior flavor and crust. The recipe is delicious, and Mike’s commentary and description of the cook is inspiring.

Since the time this was posted, we’ve adopted a different technique for our spare ribs. But you will want to read what Mike [Kerslake] says.

Want to see our new technique for Pork Spare Ribs? Check out our Recipe!

One of the best compliments I’ve ever received on my barbecue cooking came from long-time bbq’er and multiple-cooker owner, Ken Gajda (Kenny G), when we were both down at a gathering of Big Green Egg owners in Maryland in the spring of 2002. Ken said that the ribs I cooked there were among the best he’d ever tasted. Knowing the number of slabs Ken had cooked himself over the years, and the number of bbq joints he’d been to in his travels, his comments filled me with pride.

Here’s the process I used on the ribs that day.

As with any successful cook, you need to have the necessary equipment and top quality ingredients. Here you see that I have all I will, or may, need for the cook right close at hand. I’ve got a slab each of spare ribs and babybacks for this demo cook. 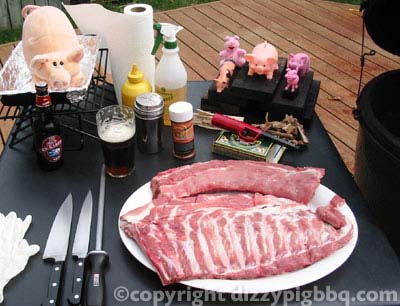 The first step I take is to remove the sheet of membrane on the backside of both slabs of ribs. I find working a knife under the membrane, lifting up and then grasping and pulling that loose ‘tag’ with a paper towel will quickly and efficiently remove the entire sheet, usually in one piece.

Starting with the spare ribs, I remove the breast bone from the rest of the slab. There’s some nice meat here, but it doesn’t really present well, so I’ll cook it on the side and put the meat into baked beans. To make the spare ribs into ‘St. Louis style’, I will continue to trim off the tail end at the last bone, remove any large ‘blobs’ or extraneous fat as well as the ‘brisket flap’ of meat that appears on the backside of the ribs. Again, this piece is fine for smoking up and adding to chili or beans, but detracts from ‘presentation-quality’ ribs. 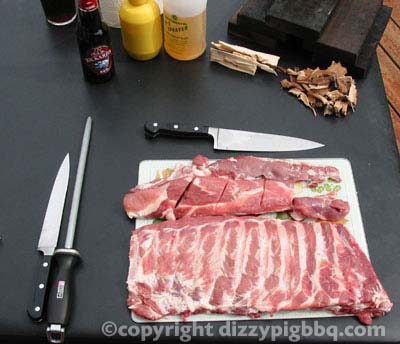 Some folks in the bbq community feel that a smear of plain old yellow mustard onto the surface of ribs helps in creating flavor, tenderness and a sticky surface for rubs to adhere. Sometimes I’ll do this step, other times not. For this demo, I did do the mustard smear on the spare ribs, but went without on the slab of babybacks. 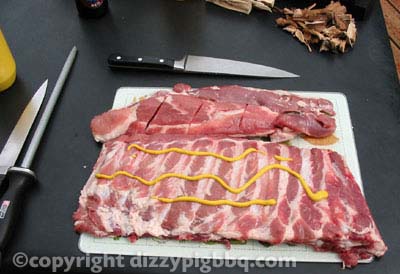 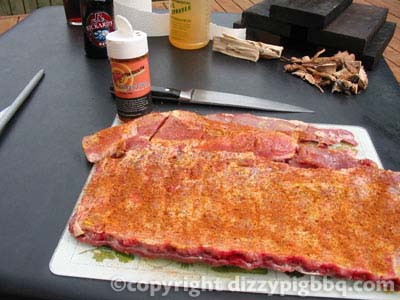 Obviously, not everyone has the same cooker as I am using here, which is a Big Green Egg (BGE) ceramic cooker. However, the ideas used here can probably be duplicated in your smoker unit, regardless of brand. Some multiple burner gas grills can do an okay job, with the help of a smoking box and a long, slow cook. 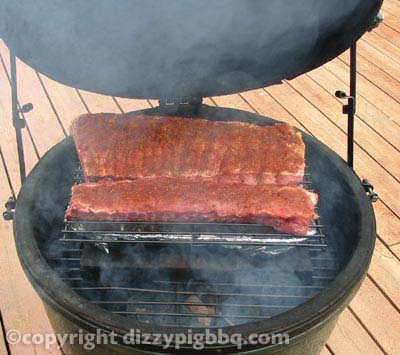 Here you can see that a lump charcoal fire has been established and some smokewood chips (pecan and hickory used here) added. On top of the cooker’s grill was set 3 firebricks to create a barrier between the food and direct flame (indirect cooking). A foil-lined drip pan supported a rack on which the side and back ribs were placed. The temperature at the cooking level was in the 225-230°F range.

After about an hour of smoking and cooking, the Dizzy Dust rub has started to form a crust on the outside of the meat. Once this has happened, I begin to occasionally spritz the surface of the ribs with a combination of apple juice and apple cider vinegar. This adds a depth of flavor to the ribs and contributes to a nice exterior color as well as introducing moisture around the ribs.

I do the spritzing about every half-hour for the remainder of the cook (which will total approximately 4 hours, but up to 7 depending on exact temps and your particular cut of ribs). The ribs are turned with every other spritzing. An additional dusting with Dizzy Dust during this period will contribute a deeper level of crusting, if desired. 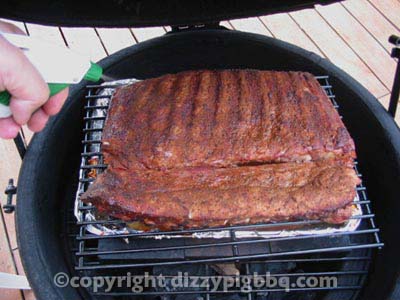 Here’s our pal Dizzy offering up some of the finished product. You may see that these ribs are served ‘dry’, meaning that no sauce has been applied at, or near, the end of the cook. If you prefer your ribs ‘wet’, certainly feel free to add your favorite sauce during the last 20 minutes of the cook, or serve it on the side as a ‘table sauce’. 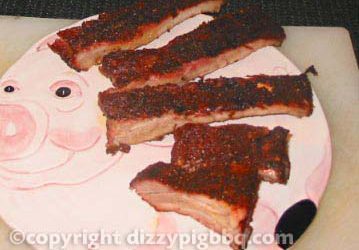 It is hard to think about barbecue without thinking about delicious smokey pork ribs! Whether… Read More