In the barbecue world, there’s not much better eating than biting into a perfectly cooked slice of beef brisket! Until you’ve tried it, you’ll just have to try and imagine the ultimate bold flavor that shouts BEEF more than any other cut on the cow.

BUT, as most folks will agree, brisket is the most difficult barbecue meat to cook consistently!

Our competition team has cooked a ton of briskets since they began competing professionally in 2002. Actually, when you do the math, it is over 2 tons. But the fact is, Dizzy Pig racked up almost 70 top ten brisket finishes in their first 120 contests — which includes 8 trips to the American Royal Invitational, and 7 invitations to the Jack Daniels World BBQ Championships. We’ll show you how to smoke a brisket in this recipe.

We find that there is a small window to hit in order to get a perfectly moist, tender and flavorful end result. But success can be achieved by:

How to Select Your Beef Brisket

Don’t forget, there are many roads that lead to a great bite of BBQ! So don’t let anyone tell you there is only one way, or that you have to follow certain precise steps. There is some art involved, so you’ll want to develop your own method that suits your cooker, your time frame, and your style.

This is the way we do it.

There are many roads to cooking a good brisket, from low and slow to hot and fast.

I’ve settled in on the low side for my briskets, and 235-240°F is the pit temperature that works best for me on my personal cooker, the Big Green Egg. The key is to cook it until a tantalizing bark (or crust) is formed on the outside as the seasoning, the smoke, and the beef all combine to create a magical flavor. 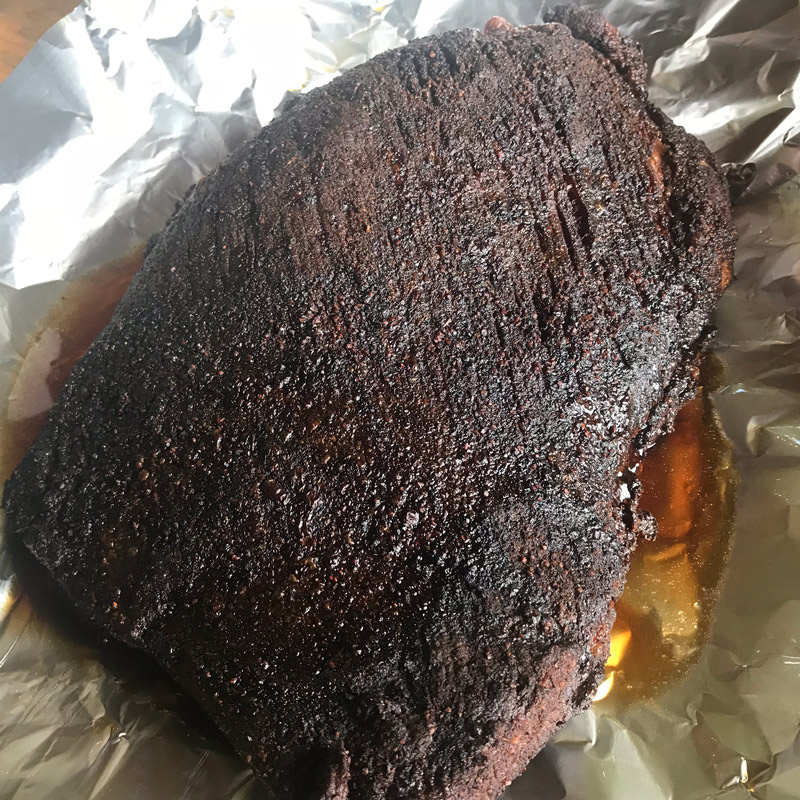 Most competition cooks, including us, like to wrap the brisket in aluminum foil once we’ve built up all the flavor and color we want on the meat. It will stop additional moisture loss and speed up cooking while you cook the brisket to the stage that it is tender.

It takes a little practice, but you can determine a great deal by pressing the probe into the brisket flat and pulling it out.

What Temperature to Cook to?

In a nutshell, there is no magic number. The brisket is tender when it is tender, and the finish temperature can vary widely depending on a large number of factors. For example,


Trust your sense of feel and you’ll get much more consistent results. Deciding when to pull the brisket off the cooker is absolutely the most important step to help you achieve brisket bliss, so take this step seriously. 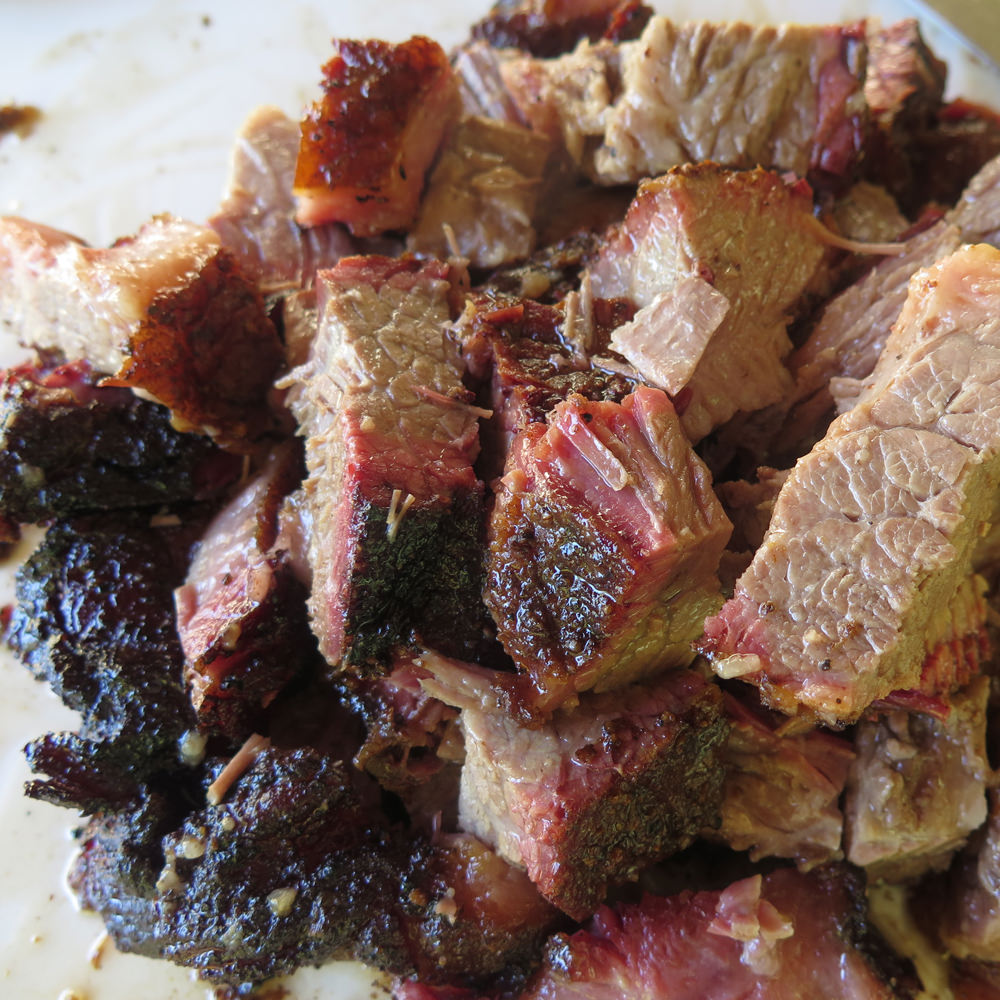 With sharp knife, trim off all membranes, silver skin, and globs of fat off of the top side of the “flat”
Trim fat off the point muscle (thicker half of brisket) to expose the meat, but leave all the fat on where it covers the flat
Sprinkle some salt on the brisket
Season brisket liberally on all sides
We typically use 1/2 cup of Dizzy Pig Cow Lick on a 12-14 pound brisket
Ensure that your smoke is clean and sweet smelling. Place brisket on cooker, fat cap down and with the “point” end toward the hotter part of your cooker
Cook for approximately 8-10 hours until brisket has formed a dark flavor crust, and is approximately 165-175°F internal temperature
Double wrap in aluminum foil, or place it covered pan. Add about 1/2 cup liquid. Brewed coffee and/or beef stock are my choice
Return tightly wrapped brisket to smoker, and cook for 2-4 more hours. Be careful not to puncture foil and lose your liquid. Begin checking tenderness when internal temperature in the thickest part of the flat is 195°F
When ready to serve, separate point and flat along fat line between the 2 muscles
With sharp carving knife, cube point
Slice flat across the grain
Brisket ready to serve!
Print Recipe

Did you make this recipe?

If you made this, snap a pic and tag it with @dizzypigbbq.
We'd love to see and share your creations!

In order to make good slow-cooked barbecue brisket, many things have to come together, starting… Read More

Dizzy Tips: Choosing the Best Meat for your Barbecue

Learning to take tough cuts of meat and cook them to be tender, moist,… Read More