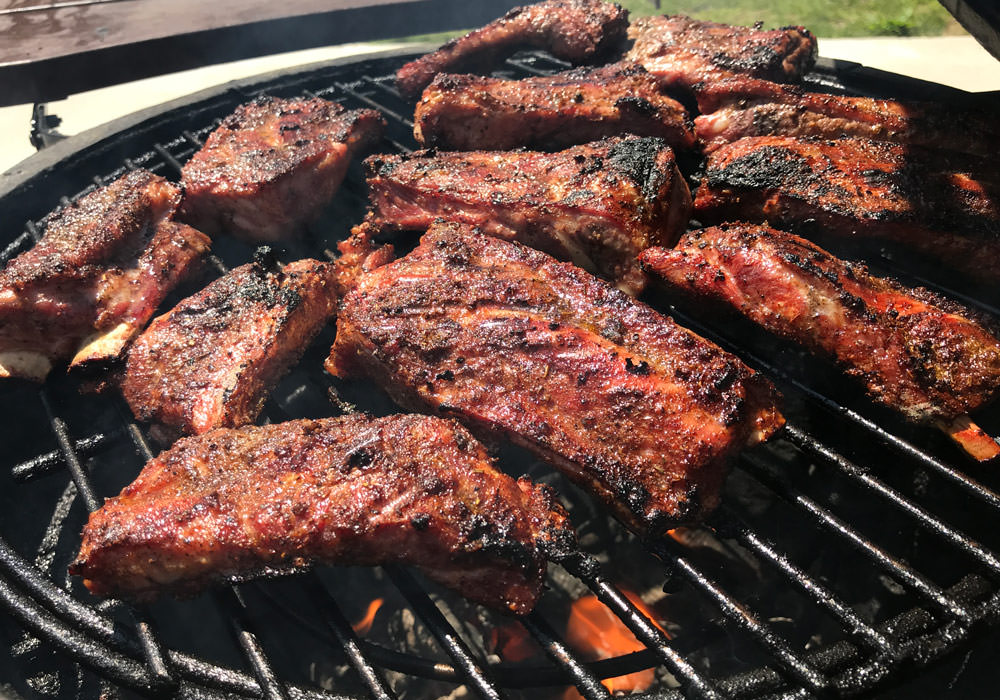 Humans have been browning food for ages and ages, and for a very good reason. Browned food almost always tastes better, and this fact is common knowledge among most anyone that loves food.

But why does browned food taste so good?

It wasn’t until 1912 when a French chemist named Louis-Camille Maillard figured out what was happening. He was actually trying to get biological cells to produce/synthesize new proteins. But instead, he learned what we’ve come to know as the Maillard Reaction.

The Maillard Reaction – when applied to heat, the sugars in the food react with the amino acids, and the result is dozens, likely hundreds, of new flavor compounds.

There are many foods that benefit from the flavor produced by the Maillard Reaction. Everyone knows that:


But a Dizzy Pig Cow Lick covered steak seared over charcoal could be the ultimate example of the Maillard Reaction at work!

In addition to the Maillard Reaction, caramelization is another process that can ramp up the flavor of your food. A less complex process,

Caramelization is the browning of sugars at temperatures above 330°F.

Caramelization also creates new flavor compounds, many of which taste delicious and nutty.

All science aside, these two valuable processes are too important to ignore, especially if you are looking for the ultimate flavor in your cooking.

Now let’s ramp up the flavor of your food

You need to take advantage of these processes by getting good browning on your food.

The combination of the heat, the meat, and a generous coating of Dizzy Pig seasonings will get you great results every time as long as you have a little knowledge, a solid plan, and the drive to execute.

General tips to get flavorful browning on your food.

Use direct heat and higher temperatures for thinner cuts

Cooking properly browned meat is a balancing act between trying to get a golden brown crust on the exterior, and a moist and tender middle.

It really doesn’t make a lot of intuitive sense, but the thinner the cut, the higher the heat needed to achieve good browning without overcooking.

You are never going to get good searing heat with an indirect setup, so the first goal is to make sure you are cooking directly over the fire with your thin cuts.

Use higher roasting temperatures for your indirect cooks

Many folks like to use indirect cooking to roast larger cuts such as roasts and whole birds. They will cook at, say, 300°F all the way through until the meat is at the desired temperature inside.

With a larger cut of meat that takes hours, the browning on the outside may be sufficient.

With smaller cuts, like a pork loin for example, a 300°F roast may not be enough heat to brown the exterior before the inside is done. Consider using 350-400°F for your roasting temperature on these smaller lean roasts, even if it is just for the last 15 minutes of the cook. This will help you build some color (and flavor) onto these roasts without overcooking them.

Rather than use higher roasting temperatures, another technique for getting good browning is to sear your roast over a hot fire at the beginning. A few minutes per side over a hot fire can build up a nice browned flavor crust before you start to roast.

The nice thing about this process is that you can sear the roast, then rest as long as needed while you prepare your cooker for indirect roasting. You could even sear it the day before, refrigerate it, and roast it the next day.

Another benefit to searing the meat first is that since you already have the desired browning, you can use lower roasting temperatures which cook the roast more evenly and with less drying.

Do a “Reverse Sear”

A great technique for evenly cooked meat involves roasting the food more slowly at lower temperatures, then building your flavor by searing your food at the end of the cook.

For example, you could roast a prime rib at 275°F for 1-2 hours until the internal temperature is 5°F below your target temp, then sear it over a hot fire at the end.

The searing process will not only build beautiful color and flavor, but your roast will finish cooking during the last few minutes. As always, rest your meats before carving.

Use a raised direct setup

One of my favorite ways to cook is direct over the fire, but with lower heat and greater distance between the food and the fire. Even larger roasts that would normally be roasted indirectly can yield great results when cooked right over the fire.

The key is to use only as much charcoal as you need, to keep the fire under control, and to set the food over a foot away from the heat source.

Flipping regularly, you can build up a great brown flavor crust on your meal, and you’ll also get the added benefit of a little fat dripping on your fire and creating that tantalizing flavor you get.

Use a generous coat of rub

You may already know that a coat of Dizzy Pig seasoning can totally elevate the flavor of your meal. When you achieve good browning on your food, the flavor of the seasoning rounds out, mellows and takes on a wonderful nutty flavor.

Since our seasonings are not loaded with salt, it is very difficult to over salt your meal. So don’t be shy! The more you apply, the better the crust will be.

These are just a few techniques I use to take the flavor of my cooking to another level with browning.

I hope, at the very least, I have inspired you to think a little more about the browning you get on your meal, and how much good browning affects your final flavor. You have already selected the best seasonings with Dizzy Pig. The next step is to continue the quest to create the perfect bite of food.

We hope you have enjoyed another Dizzy Tips article!