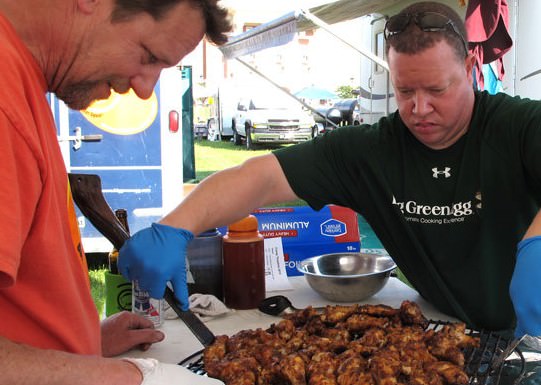 It was hard to top our two big grand championships in 2014, but in 2015 we had a blast connecting with old friends and making new ones while spreading the word about the Dizzy Pig and the Big Green Egg.

We weren’t able to compete as much as normal, but the team managed to rack up a respectable four top ten finishes out of five contests!

We started off in May at Jiggy with the Piggy BBQ Challenge (Kannapolis, NC), where we won 2nd place in People’s Choice with our Tsunami Spin wings.

We then headed to one of our favorite competitions, the Harpoon Championships of New England (Windsor, VT) in July, placing 5th in ribs, 3rd in pork, and 10th overall.

The Black Dog Music and Que Festival (Floyd, VA) gave us another 10th place overall finish, with a 1st place in pork.

Our last stop for the year was at the New Holland Summerfest (PA) in August where we finished 5th in chicken, 6th in pork, and 4th overall in a field of 70. We can’t wait to get back on the circuit in 2016!