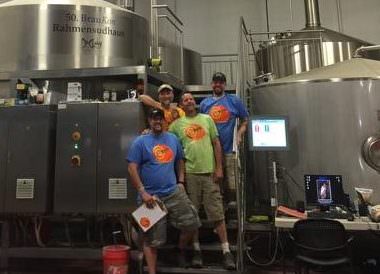 Since 1996, DuClaw Brewing Company of Baltimore, MD has “Made It Cool” by creating dozens of amazing and unique beer styles and distributing them throughout the mid-Atlantic region. Their top-selling chocolate peanut butter porter, Sweet Baby Jesus, enjoys critical acclaim and a wide distribution footprint, while their extensive lineup of award-winning beers continues to grow.

When Brandon “Millhouse” Miller and the other brewers at DuClaw came up with the idea to release BBQ Pale Ale, they immediately turned to Chris Capell, creator of the best BBQ spice blends, Dizzy Pig BBQ Seasonings. “The idea of combining a crisp pale ale with BBQ seemed natural,” explains Miller, “and after tossing the idea around for a while, we knew there was only one guy to work with.”

After months of experimentation, honing and balancing of flavors, Capell and the DuClaw brewing crew created a beer unlike any other: An amber colored pale ale with Columbus and Cascade hops carefully blended with an infusion of Dizzy Pig’s best-selling Dizzy Dust, this brew is crisp with a light caramel malt flavor that finishes dry with a hint of BBQ herbs and spices.

Introduced this summer at the Maryland State BBQ Bash in Bel Air, MD, BBQ Pale Ale is currently available in draft only, and is being distributed to restaurants and growler fill stations throughout DuClaw’s distribution network.

Headquartered in Manassas, Virginia, the Dizzy Pig Barbecue Company, LLC, founded in 2002 offers the absolute tastiest, all-natural seasonings, hand-blended with only the freshest, highest-quality ingredients. Dizzy Pig currently spins 14 original seasonings plus 4 more in its ish-Fusion Blends line-up. The Dizzy Pig competition team has won over 15 Grand Championships using the rubs, and countless other teams have earned trophies and ribbons for their entries using Dizzy Pig products. The team continues to win over judges and followers in 2015 and beyond. With an army of loyal customers and 15 years of competition awards under their belts, Dizzy Pig’s brightly flavored and perfectly balanced spice blends are widely acclaimed. Dizzy Pig seasonings contain no gluten or MSG and can be found at over 700 retailers throughout the U.S. and Canada. For more information, visit https://dizzypigbbq.com.

Dizzy Pig in the Winter: Heating Things Up Indoors

Many Dizzy Pig fans are proud and passionate about their ability, desire and passion for… Read More